Coal Financing: Swept under the rug

In December 2015, more than 190 nations met in Paris for the 21st Conference of the Parties to the United Nations Framework Convention on Climate Change (COP21). The conference produced the Paris Agreement, with countries committing to limit the average global temperature rise to 2 degrees Celsius, and to make best efforts to limit the increase to 1.5 degrees. Unfortunately, continued government financing for international coal projects undermines that goal.

Government financing for coal —largely in the form of export support, but also as development aid and general finance— is facilitating the expansion of coal use and exacerbating climate change. The latest report from the Intergovernmental Panel on Climate Change (IPCC) makes clear that human activities, especially the burning of fossil fuels, have increased the concentrations of greenhouse gases in the atmosphere, with widespread environmental impacts.

Coal accounts for two-fifths of all global energy related carbon emissions—more than the contributions from oil or gas. As a result, researchers have calculated that in order to meet the target of 2 °C, 80 percent of global coal reserves will need to remain unused.

For this reason, governments must limit future coal projects to have a good chance of limiting future temperature increases. But at a time when the global community must marshal its resources to fight climate change, governments are using scarce public money to aggravate the problem. Even worse, they often try to sweep under the rug the financing they provide through national export credit agencies and other institutions, as these entities provide very limited public disclosure of the coal projects they finance [1].

Since 2007, the G7 countries have provided more than $42 billion of public finance for coal

A new analysis entitled “Swept under the rug: How G7 Nations Conceal Public Financing for Coal Around the World” reviews international coal financing from 2007 to 2015 in the G7 countries: Canada, France, Germany, Italy, Japan, the United Kingdom, and the United States. The database [publicly available, xlsx] includes information on coal power plants, coal mining, transmission and distribution projects linked to coal power, and other related activities.

Results find that between 2007 and 2015, the G7 countries have provided more than $42 billion of public finance for coal in the form of direct finance, guarantees, technical assistance, and aid for coal power, coal mining and related projects.

While many countries have made public commitments to end most public financing of overseas coal projects in the lead-in to the Paris climate agreement, three countries—Japan, Germany, and Italy—continued to directly fund coal power plants. And amongst the G7 countries Japan continues to be actively pursuing projects.

From 2007 to 2015, channels for coal financing shifted from Multilateral Development Banks and toward Export Credits Agencies and other bilateral finance institutions, with the Japan Bank for International Cooperation being the largest financier among all institutions analyzed.

About 75 percent of all coal financing went to coal power plants. Others went to coal mining, transmission and distribution, emissions control, and other activities. Emissions from coal plants financed by G7 governments from 2007 to 2015 totaled 101 million metric tons of carbon dioxide-equivalent per year, which is the same as the annual per capita emissions in 2013 for 60 million Indians or 6 million Americans.

What’s appalling is that Japan counts some of its coal projects as “climate finance.” Japan has counted $1 billion in loans for coal plants in Indonesia and is counting two coal projects underway in India and Bangladesh as climate finance because the plants burn coal more efficiently than older plants. Japan is the only G7 country attempting to pass off financing for coal as climate finance, undermining the principles of the Paris Agreement. Counting coal projects inflates Japan’s numbers so they appear to be a big financial supporter for climate action. In reality, the coal projects Japan is funding lock recipient countries into decades of coal use, and hazardous environmental and health impacts. 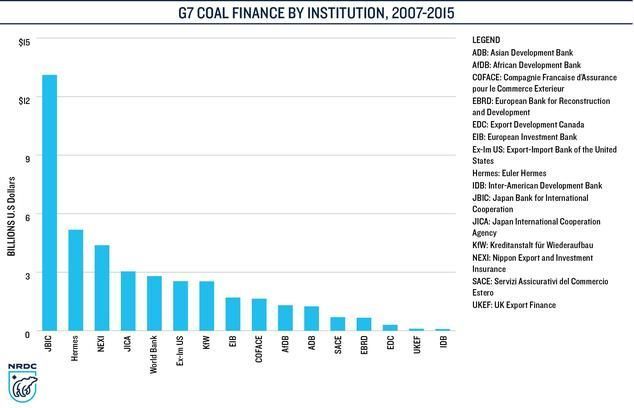 Public financing has played a significant role in supporting coal projects over the past nine years. In spite of repeated climate change mitigation commitments by all countries to limit the expansion of fossil fuel use, and in spite of annual commitments at G20 meetings and other forums to end fossil fuel subsidies, nations and international institutions continue to provide significant public support for coal, oil, and gas. Given the severe climate impacts of fossil fuels, such public support for carbon-intensive energy sources should be quickly phased out—beginning with public financing for coal.

Developing coal projects requires financial decisions by investors and banks, both private and public. Ultimately, the availability of international financing determines a coal project’s viability. Without financing, such projects would not exist. Given the climate, health, and environmental impacts, such projects should not be financed at all in the future—especially with public funds. Investing in and subsidizing coal power plants, mining, and infrastructure development in a carbon-constrained world is a losing proposition.

A modified version of this blog was first published in NRDC.org

[1] ^The figures are likely an underestimation since it is based mostly on publicly available data and not all of these institutions are transparent. 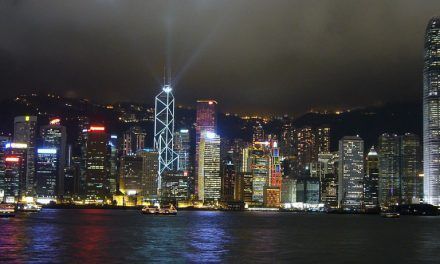 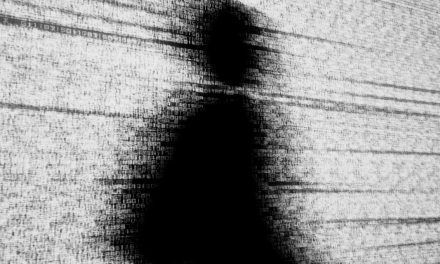 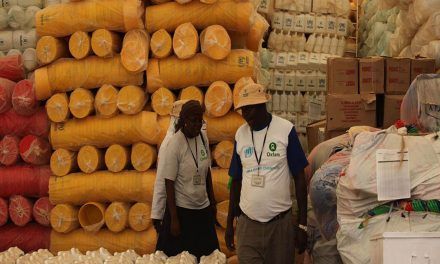